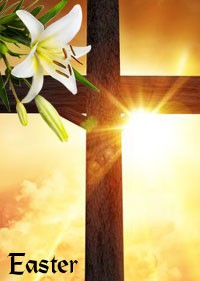 Easter Props
These props will help you present the Easter pageant in your church or Sunday School. 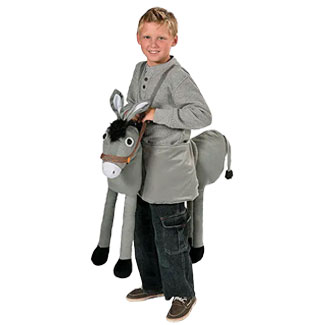 Jerusalem on a donkey as a crowd carpeted the road with palm branches and robes.

“Jesus sent two disciples, saying to them, ‘Go into the village that is opposite you, and immediately you will find a donkey tied, and a colt with her. Untie them, and bring them to me.” Matthew 21:1-2

As Jesus rode into Jerusalem on a donkey,

“… a very great multitude spread their clothes on the road. Others cut branches from the trees, and spread them on the road. The multitudes who went before Him, and who followed, cried, ‘Hosanna to the son of David! Blessed is he who comes in the name of the Lord! Hosanna in the highest!’ ” Matthew 21:8-9 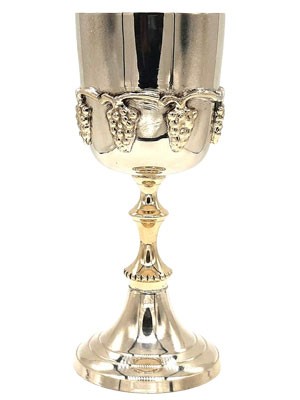 This solid brass cup is a great prop for The Last Supper.

“As they were eating, Jesus took bread, gave thanks for it, and broke it. He gave to the disciples, and said, ‘Take, eat; this is my body.’ He took the cup, gave thanks, and gave to them, saying, ‘Drink all of it, for this is my blood of the new covenant, which is poured out for many for the remission of sins.” Matthew 26:26-28

This 4’ toy whip is made of foam for safety.

“And Pilate, desiring to do what was pleasing to the people, let Barabbas go free, and gave up Jesus, when he had been whipped, to be put to death on the cross.” Mark 15:15 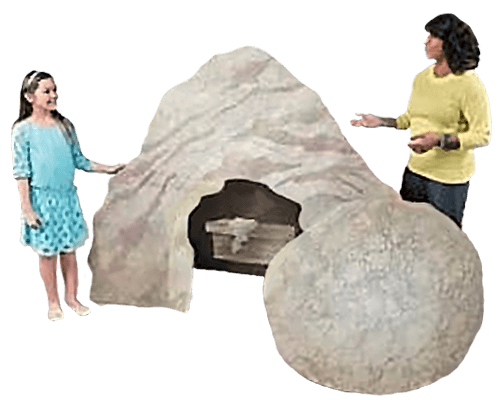 This cardboard tomb with rolling stone is an excellent stage prop for your Easter play.

“Joseph took the body, and wrapped it in a clean linen cloth, and laid it in his own new tomb, which he had hewn out in the rock, and he rolled a great stone to the door of the tomb, and departed.” Matthew 27:59-60

“But on the first day of the week, at dawn, they came to the place where his body had been put, taking the spices which they had got ready. And they saw that the stone had been rolled away.” Luke 24:1-2

This 8’ x 10’ backdrop of three crosses on Calgary is a wonderful finality to your Easter pageant, a visual reminder of the Resurrection.

“Now after the Sabbath, as it began to dawn on the first day of the week, Mary Magdalene and the other Mary came to see the tomb. Behold, there was a great earthquake, for an angel of the Lord descended from the sky, and came and rolled away the stone from the door, and sat on it. His appearance was like lightning, and his clothing white as snow. For fear of him, the guards shook, and became like dead men. The angel answered the women, ‘Don’t be afraid, for I know that you seek Jesus, who has been crucified. He is not here, for he has risen, just like he said.’ ”
Matthew 28:1-6